A lifeline for learners

Andrea was a "school refuser” who was bereaved after the death of a close family member and had suffered depression and anxiety. By her own admission, life did not seem worth living.

But enrolling on an ASDAN programme at her school, Beenleigh State High, in Brisbane, turned her life around. She went from constant truanting to attending lessons for an hour a day, and is now in education full-time working towards qualifications in English, maths and music as well as the ASDAN Gold award.

"ASDAN class is like a quiet place to come to,” Andrea said. "I can work at my own pace, people are easier to get along with, and Ms Jude is helpful, and knows that not everybody has the same needs.”

ASDAN programmes were brought to Queensland, Australia, several years ago by Judy Raudon-Hill – known to her students as Ms Jude - the school’s ASDAN lead teacher, after she had trained to deliver the programmes in the UK. She persuaded the head at Beenleigh that they would be effective with pupils who were disengaged, at risk of dropping out and who had social and emotional problems, brought on by difficult family circumstances.

"The head said that if it didn’t work, he’d get rid of me, but I’m still here” Judy says. She started by offering ASDAN Bronze, allowing students to build up to Silver and Gold, and within a year or so the programmes became accredited by the Queensland Curriculum and Assessment Authority.

"I was absolutely clear that ASDAN was not going to become a dumping ground for bad kids,” she said. "It is a proper programme of study for those who were school phobics, had had problems with bullying or other difficulties in their lives. They come to me for a chat and are told they have to work. You don’t ‘wag’ ASDAN. You are expected to attend. As a result, pupils who were truanting suddenly started recording attendance of 95% to 100% and are succeeding in other subjects.”

In the past couple of months ASDAN students have been, among other activities, working in the Permaculture garden planting potatoes, sunflowers and carrots, and looking after the hens, an orphaned goat kid, piglet and calves. They have also been making their own liquid soap and shampoo, learning how to knit and hand sew, taking part in group discussions, planning and fundraising for their annual camp, researching and writing movie reviews and biographies, welcoming and showing visitors around. 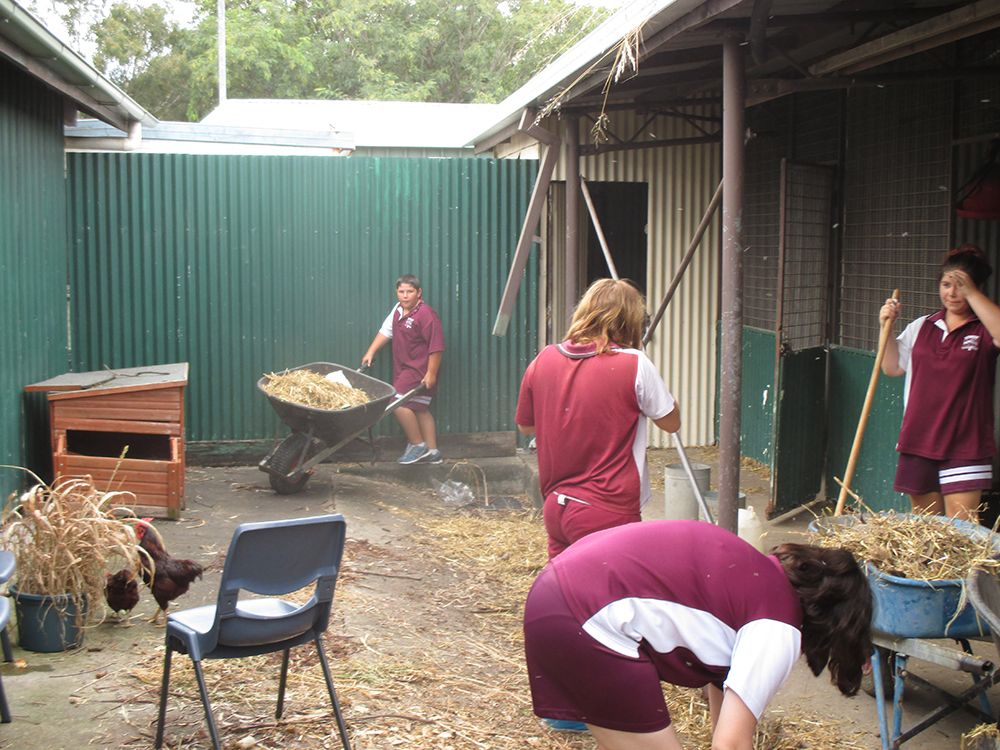 "Students often ask how they can join ASDAN and I tell them that it is open only to exceptional students,” Judy says. "You don’t have to be a gifted and talented student or have a learning difficulty to be a candidate for the ASDAN programme but you do need to be able to be an independent and self-motivated learner because the programme requires you to work hard.”

Judy’s hard work was recognised by a member of Australia’s House of Representatives four years ago, and recorded in Hansard, when Representative Bert Van Manen publicly congratulated Kaleb Bierge, the first Australian student to receive the Bronze award. He told the House: "ASDAN is a charitable social enterprise whose mission is to create the opportunity for learners to achieve personal and social development through a structured program of awards and qualifications. This enhances their self-esteem, their aspirations and their potential to contribute to their community. It encourages the growth of their creativity, innovation, employability, self-confidence and self-worth and is designed to inspire future citizens for the 21st century.”

"This was a huge deal for us at Beenleigh, and for me personally, to be recognised and mentioned like this, and for ASDAN to be described publicly for what it offers students” Judy says. "Quite simply, for many, it is a lifeline.”

The work being done at Beenleigh was observed by Maggie Walker, ASDAN’s chief executive, on a visit to Queensland earlier this year, where she trained teachers to deliver its qualifications, as part of the State’s roll-out of the programme.

Maggie said: "Pupils and parents had some amazing, heart-warming stories to tell about how ASDAN had, in some cases, saved their children and even their families. Pupils who were disengaged and refusing to attend school were suddenly finding they could achieve, were discovering new gifts and talents and, as a result, making excellent progress in other subjects because they were in school and not truanting. Judy has done fantastic work at Beenleigh, which has been rightly recognised because the State of Queensland is now expanding the programme across all of its schools.

"This is exactly what ASDAN’s mission has always been – offering a means of success and achievement to pupils who have encountered difficulties in their lives, whether it is through learning problems, or social issues. Every child deserves to succeed and be given a chance for a better future.”

For children like Andrea ASDAN has, indeed, proved a life-line.

She says: "I am now attending school full time studying English, Maths and music. I am currently passing all of them, with a B- in English and an A in music. I am still doing ASDAN at school as well. I am hoping to go to Japan in September for two weeks with other students.

"I have spoken to groups of adults that I didn’t know, to tell them about how ASDAN has helped me. I also help out Ms Jude with the garden at school, and her agriculture classes. ASDAN class is really an amazing place, and the people there, including Ms Jude are so supportive. Because of the comforting place of ASDAN, I no longer feel like I want to die.”